TLDR; the Dutch government continues to function at relatively high level and continues its downward progressive spiral like the obedient American/European Union province it is.

Right after the 2017 Dutch election I had a short convo with John Rivers on Gab who, after listening to a Dutch drunk guy thought all hope was lost: 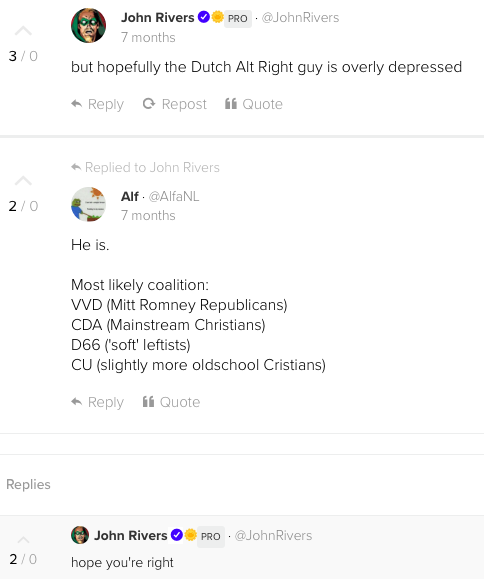 Turns out I was right. It was a close shave though: at first the VVD cuckservatives turned to the Greenlefts as a coalition partner! Luckily the mainstream Christians turn out to have some balls after all and the talks with the Greens crashed on immigration. So now instead of an openly leftist coalition we have Kukke III: the closeted cuck coalition. Like George W. Bush won a third term.

The 60-page coalition agreement summary reads worse than a bachelor student’s thesis, but from what I gather the following points are included:
– Taxes on products will go up (6% to 9%)
– Healthcare premiums will go up
– More EU
– Mandatory visit of Dutch art & learning of national anthem for high school students

That last point of course is the kind of consolation prize aboriginals receive from their new conquerors: ‘no no no of course your culture is still important. Here’s a complimentary museum ticket.’ Ah well, at least the Greens are not in the coalition. Alf’s overall judgment of the new Dutch coalition: it’s the party cartel all right, but not the worst part of the party cartel. Par for the course.

edit: 1/3rd of the minister positions will be filled with women. Go figure.

2 thoughts on “New Dutch Government: par for the course”

This site uses Akismet to reduce spam. Learn how your comment data is processed.